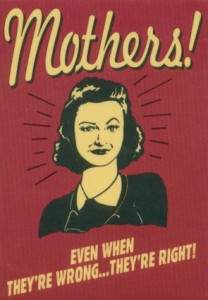 As we all know, part of being single is having to field the constant inquires from parents, relatives, friends and sometimes even complete strangers as to why we are still single.  Here is one of the most amusing insights I have read from a fellow solo and #365Love Get Connected member Glenn Millar.

Thanks for the chuckle!

No matter what your religion or ethnicity, it seems critically important to Mothers that you marry within your ethnic background.  If you are Asian, your Mother wants you to date other Asians.  If you are Catholic, you must marry another Catholic.  And, if you are Jewish then you should find a nice Jewish boy or girl.

I can’t speak for other cultures, but in the case of Judaism there is a critical reason for marrying within the religion.  In this way, we ensure that the guilt chain is carried down from generation to generation.

Parents seem to get angry when you date outside of your ethnic background.  For instance, if you are Jewish, you can actually give your Mother a heart attack by dating a Catholic.  Frankly, I am not completely sure why this is, when Catholics and Jews have so much in common.

But both religions come with a Mother who considers it a personal affront, if not a mortal sin, that you are over 30, single and aren’t going to have children in the next 6 months.

Like all good Jewish Mothers, my Mother is always bugging me about getting married.  “Have you met any nice Jewish girls?” she will always ask me.  If I answer, “no”, she will invariably try and fix me up.  She thinks she is Yenta the Matchmaker.

“A woman in my bridge club.  Her Niece’s friend.  A nice girl,” she replies.

“So you’ve never actually met her?” I ask.

“No, but she’d be perfect for you”

“See if I care.  I should go to my grave with no grandchildren.”

One time my Mother called me, once again, trying to fix me up.

“She doesn’t,” says my Mother.  “But her husband Morty’s been dead two years now.  Maybe you could ask her out.”

I’m always trying to get my Mother off my back about me still being single.  I had tried everything, but nothing worked.  When I moved to San Francisco I thought I had found a solution. You see, my Mother is extremely conservative.  So one time when she called and as usual asked, “Have you met any nice Jewish girls?” I decided to play on her worst fears.

“Mom, you are not going to believe this.  I met the perfect person.  We are deeply and madly in love.  We have so much in common.  We do everything together.  Even the sex is incredible.  Mom, he is the nicest man you would ever want to meet.”

There was silence on the other end of the phone.  “I have her,”  I thought.  “I have finally shut her up.”

Then, finally, the sound of my Mother’s voice.  “So, is he Jewish?”